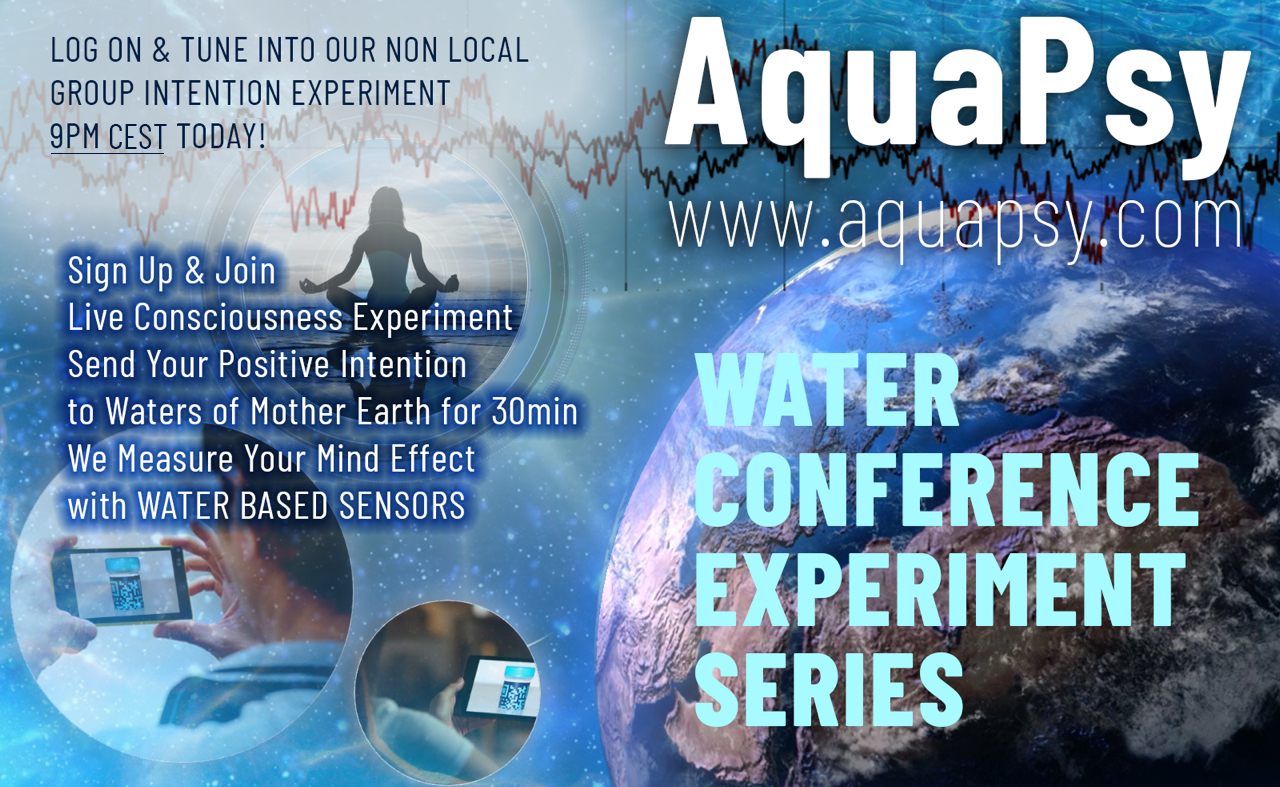 Can conscious observation affect a water sample at a distance? If so, how would it be measured and quantified? Lets experiment! Click link to join and participate in this live consciousness experiment. Friday, Oct 25th at 9pm CEST. Send your positive intention to Waters of Mother Earth. We will measure your intention with WATER BASED SENSORS.

Experiment will indicate as started and run for a 30 min period. Join us for as long as you want from anywhere, on any device. Real time feedback results will be posted in the continuous live graph plot. Connect visually with the live plot and set your positive intention for Waters of Mother Earth. When you finish, feel leave a comment and tell us about your experience.

Consciousness is something which is familiar to most; however, its nature is still a great mystery. The AquaPsy platform is a new generation system for consciousness research which explores and expands the capabilities of personal and collective consciousness.

How does it work? Through the AquaPsy platform, people from around the world are remotely connected to water-based sensors that can detect and evaluate influences caused by non-local mind effects. The platform can be used in an individual as well as a group setting to help further develop consciousness and train the mind for such practices as meditation and yoga. Additionally, AquaPsy is an excellent tool for Energy Practitioners (e.g. those who practice Reiki, distant healing, etc.) to further train and develop their skills.

Please like and follow this page to be kept up-to-date on the latest happenings on the AquaPsy platform, which includes upcoming collective sessions where you can participate and see the effects for yourself. Be part of science in the making and let’s see what happens when thousands of people concentrate on the same object at the same time.

Let's further understand ourselves and the world around us! Continue to join our non conventional research efforts to measure and characterize water and consciousness.

EIS experiments are performed, among others, to tests the effect of macroscopic entanglement – research field that currently represents a fast-growing community. Emitting and receiving devices are spatially separated between 10E1 and 10E5 meters, the conducted experiments have collected large statistics during last 20 years by different research teams. Arguments about this effect go towards quantum phenomena in water (proton tunneling, fluctuation of electric fields and self-ionization, hydrogen bond fluctuation etc.) that are measurable on a macroscopic level as a variation of electrochemical parameters. These works indicated a sensitivity of this approach to environmental conditions, and in particular, to well- known ‘observer effect’. In fact, an operator (who performed the attempt or an external observer) was able intentionally to stimulate or to inhibit the electrochemical dynamics in a tiny range. Such experiments are known and have been academically explored in different countries. For example, large-scale studies of External Qi, especially for its distant form, have been conducted in China, the 'consciousness-consciousness' and 'consciousness-device' approaches are largely investigated in USA and USSR in the 80s and 90s. Researchers examine biological processes in living neurons, which occur on quantum level, and express hypotheses about their involvement into macroscopic entanglement of 'consciousness-device' type.

This presentation reports on devices, setups and methodology of distant ‘consciousness-device’ experiments performed as a long-range signal transmission between spatially separated human- 'transmitters' and device-'receivers’. These experiments have been conducted between 2015 and 2019 with operators from the USA, Canada, Europe, Russia, China, Argentina, and include several series of web-based, youtube-based and public-audience-based attempts. Signals on the receiver side are detected by EIS of water-containing systems (trademarked as the M.I.N.D. system) and biological reaction of plant organisms. They are displayed as real-time html plots streamed in internet and represent a remote feedback. Electrical activity of brain during some of these attempts was recorded by EEG and made available to operators also in real time for local neurocognitive feedback. Combination of remote EIS and local EEG feedbacks enables controllable conditions for operators and contributes to achieving well-repeatable outcomes. Experiments demonstrated initial 74% of success in web-based attempts that is improved up to 96%-98% with increasing the number of repeating attempts. The developed approach has multiple applications, among others, for training of operators who target distant activities, advanced meditations, yoga, stress therapy and in studying altered states of consciousness.